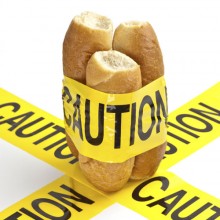 Gluten is the protein that gives dough its elasticity; it makes wheat bread fluffy and pie crusts crispy. However, for many of us gluten may also be the reason for abdominal pain, rashes, and fatigue. A new research study suggests that individuals who are sensitive to gluten yet do not suffer from celiac disease (allergy to gluten) may harbor high levels of a molecule called zonulin. Zonulin is the inflammatory protein responsible for protecting your body by triggering diarrhea when you accidentally eat harmful bacteria such as salmonella. Researchers believe gluten activates zonulin protein which causes all these symptoms. A recent study found that levels of zonulin levels were high in both celiac and gluten-sensitive individuals. This molecule has been linked to inflammation and is believed to cause symptoms similar to irritable bowel syndrome (IBS) such as abdominal pain, bloating, diarrhea or constipation. Researchers believe that “Brain Fog”, headache, fatigue, joint pain and muscle pain could also be symptoms associated with high levels of zonulin molecules in the body. This new biomarker could lead the way to new research to develop clinical testing for gluten sensitivity. This molecule may be important in many illnesses, and research could open the door to the treatment of other illnesses with similar symptoms. Chronic fatigue syndrome and fibromyalgia patients also suffer from abdominal pain and fatigue.  Thus finding a treatment for these symptoms could allow patients to reduce the amount of medications taken to treat each symptom individually. For more information, please contact us at 352-265-8901 or email us at painresearch@medicine.ufl.edu