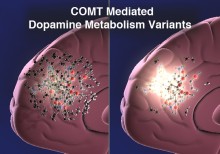 Have you ever wondered why some people experience improvement following the administration of placebo? The explanation may be in our genes. A study conducted by researchers at the Program in Placebo Studies (PiPS) may explain why some patients respond to a placebo while others feel no relief. Researchers at PiPS examined a gene that is potentially involved in pain, anxiety, multitasking, and mood to determine if there was a relationship with placebo response.

The COMT gene codes for an enzyme of the same name that plays a role in the breakdown of neurotransmitters known as catecholamines.   Catecholamines such as dopamine, norepinephrine, and epinephrine are implicated in pain, mood and alertness. The study conducted by the researchers at PiPS in 2012 examined the response of those with Irritable Bowel Syndrome (IBS) to placebo, and then analyzed the COMT gene of the participants looking for a relationship between the two. The COMT gene has several polymorphisms or variations—Met/Met, Met/Val, and Val/Val. Those with the Met/Met polymorphism showed the greatest response to placebo in this study, while those with the Val/Val variant showed no improvement from placebo. These interesting results could potentially lead to further studies allowing for the development of better understanding of and treatments for chronic pain and related conditions.

Interestingly, the COMT gene is also thought to potentially play a role in pain sensitivity and fibromyalgia. A study conducted at Geneva University in Switzerland examined the role of COMT polymorphism as well as emotional factors in fibromyalgia. In this study, researchers conducted a test known as the nociceptive flexion test (NFR) to determine whether the subjects were centrally sensitized. Lower NFR scores are associated with lower pain thresholds. In the patients with central sensitization, those with the Met/Met polymorphism had the lowest NFR, while the highest NFR was found in those with the Val/Val polymorphism. Spontaneous pain scores were also greater in the sensitized patients within the Met/Met subgroup.

As technology advances, more and more research is being done on the role that our genome plays in our unique experience of life and development of disease. However, the relationship between genes variants and their observable effects is often complicated, and research to this effect must be assessed cautiously.  More research should be done regarding the role of COMT in both pain and placebo in the future.

The placebo effect has many implications in clinical research and response to treatment. It is important that this effect, particularly in the context of pain, be better understood. At the University of Florida Pain and Fatigue Research Center, we are working on developing a better understanding of pain. For more information, please give us a call at 352-265-8901, or email us at painresearch@medicine.ufl.edu