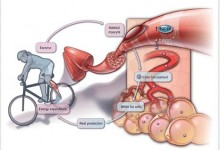 The next time your doctor tells you to exercise regularly, you may want to take him more seriously. Researchers at Harvard Medical School have found an exercise-induced hormone, coined irisin, which can turn “white” fat into “brown” fat. Of the two types of fat, “brown” fat is associated with a healthier body weight. While “brown” fat is much less prevalent in our bodies (adults on carry a few ounces of this), it actually burns calories and emits heat. “White” fat, on the other hand is much more prevalent and higher levels of it are indicative of obesity, diabetes, and other chronic medical issues.

Hence, when scientists tried to determine how muscles communicate with fat cells, they observed unique chemical changes that occurred in the muscles of mice during and after exercise. The substance PGC1-alpha is produced in abundance during exercise. This substance also jump starts the production of the exercise hormone FNDC-5, or irisin. Once produced in the muscles, irisin travels through the bloodstream until it enters fat cells, where it literally “browns” fat.

Moreover, when irisin was injected into mice, it was found that those mice were more resistant to weight gain, even on high-fat diets! Irisin exists in the human body just the same as in mice. Researchers also found that people who completed a controlled exercise regimen had increased levels of irisin after the intervention. Even more startling are more recent findings indicating that irsin can slow down the aging process and increase cognitive function.

So, the best way to stave off chronic health issues as we age may be to continue a regular, aerobic exercise regimen. We are using brain scanning to detect the effects of exercise on brain function in one of our current protocols. For more information, please contact us at 352-265-8901 or by email at painresearch@medicine.ufl.edu