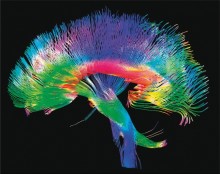 One of them it the “Human Connectome Project” funded by the National Institute of Health (NIH). The study of connectomes, or connectomics, includes detailed maps of neurons and their extension (called axons) within the nervous systems, as well as analysis of structural and functional connections between different brain regions. A full connectome has been constructed for one round worm, C. elegans, and partial connectomes exist for mice. Multiple research  institutes are trying to take the understanding of the brain one step further by determining how neurons interact. Such efforts start with a functional and anatomical map, and require additional information, including how neurons store, transmit, and process information.

For the human brain, the Human Connectome Project (HCP), sponsored by the NIH, was started in 2009. This roughly $40 million project, undertaken by Washington University in Saint Louis, the University of Minnesota, Harvard University, Massachusetts General Hospital and the University of California Los Angeles, aims to build a comprehensive map of all neuronal connections in the human brain. From this network map, the investigators hope to gain a better understanding of the anatomical and functional connectivity of a healthy human brain, to support further research into various brain disorders.

The HCP aims to build a reference model of the healthy human brain through over 1,000 rigorous analyses of human volunteers. Participants will spend 10 hours undergoing brain scans, cognitive, psychological, physical, and genetic testing. Ultimately, the final goal is to create a baseline database in the form of a three-dimensional, interactive map of the healthy human brain, which will be available online to researchers worldwide. From this database, further analyses can be made regarding personality traits, cognitive skills, and genetic traits, allowing better understanding how brain wiring relates to thoughts, behaviors, and emotions.

With billions of neurons in an adult human’s brain, scientists have a challenging task ahead of them. Similar to the Human Genome Project, which sought to map the human genome, the HCP serves as a starting point for uncovering one of the mysteries of human beings, namely their brain. As Isaac Newton once said, “If I have seen further it is by standing on the shoulders of giants.”

At the Center for Musculoskeletal Pain Research, we are hopeful that such efforts will contribute to further understanding of debilitating medical conditions such as Chronic Pain and Fatigue. One of our new projects is dedicated to brain imaging to better understand patients’ brain mechanisms related to pain and fatigue, specifically to map the location of pain and fatigue in the brain. For more information on brain scanning of fatigue, or the HCP, please contact us at 352 265 8901 or email us at painresearch.medicine.ufl.edu.