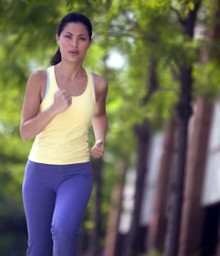 We’ve all heard the same piece of advice at some point or another; diet and exercise is the key to good health. But what if some of us are genetically predisposed to being more physically active, more motivated to exercise? What if genes are to blame for some of us preferring to watch American Idol rather than go on a 10 mile run? The majority of U.S. adults do not meet the daily physical activity guidelines and we know that a lack of sufficient physical activity is linked with a number of health conditions, including accelerated aging and premature death. So finding out what motivates some people to exercise could help doctors and researchers solve this growing problem.

Investigators at the University of Missouri sought to do just that by investigating whether there were any differences between groups that are physically active and those that are more sedentary. They did this by creating two rat groups, one that loves to run and one that would rather not run. In doing so they wanted to see if there was a genetic difference between rats who use their running wheel avidly and those that don’t use it at all. Ultimately they wanted to see if these two rat models could shed some light on what motivates us to exercise and why many individuals chose to skip the gym.

The two rat groups were created by examining the running behaviors of an initial group of rats and breeding the rats that logged the most time on their exercise wheel together. The second group was created by breeding the rats that logged the least amount of time on the exercise wheel together. After several generations of breeding, a rat lineage was created that spent a lot of time running, and actually seemed to enjoy running, and a second rat group that logged barely any time on the exercise wheel, ran shorter distances, were slower, and seemed to dislike exercise. Once the two separate rat families were established and had bred for several generations, the high running rat group exercised 10 times as much as the rats in the other group. The scientists then examined the differences between the two types of rats’ DNA, brain, and bodies.

Scientist looked at genetics and found that there were significant differences in the expression of several genes in the two groups of rats. The two groups were found to have differences in dopamine signaling genes, which implies differences in motivation, pleasure, and cognition in the two rat groups. This means that the genetics and biology of motivation influences the rats’ willingness to run, and rats that enjoy running may feel a psychological reward or pleasure from running. Translating this information to humans, this could mean that the genetics and biology of motivation play a larger role in the willingness to exercise than was previously believed. The next step would be to see if these same genes and pathways are at play in humans, and to further to examine the differences in exercise motivation between the two lines of rats by looking at how it is mechanistically controlled. From this information it would be possible to develop a test to see if an individual is genetically predisposed to exercise or not, and it might even be possible to develop ways to increase our motivation to exercise.

Ultimately, the decision to exercise lies with the individual and even if it is found that humans exhibit differences in their neurobiology that influence their likelihood to exercise, personal responsibility and accountability should not be overlooked.